The sixth (second in the year 2011) meeting of the research project was held at the Sekishoin temple, one of the ‘shukubo’ guesthouses in the Shingon Buddist monastery of Koyasan, Wakayama prefecture. Sixteen members of the project group attended the meeting, joined by two invited speakers for special lectures. 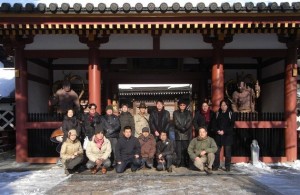 Project leader Katsumi Fukasawa commenced the meeting with a report on the budget for the years 2011 and 2012. It was confirmed that in 2012 the research group should hold an international symposium that would reflect the research outcomes, and a final research meeting at the end of 2012. Group membership and their respective roles were adjusted and confirmed. The international symposium was scheduled for 20-21 October 2012 and to be held in Japan. 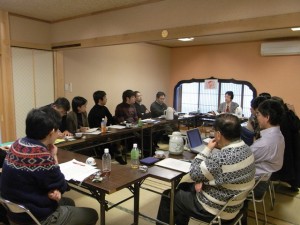 Following a discussion about the general framework of the symposium, selected research group members gave presentations on their prospective topics. Special attention was paid to coexistence, assimilation, conversion and unification of different religious groups in various historical fields. After discussion, other members gave reports on possible invitees from overseas to join the symposium.

The morning session of the second day (28 December) started with a research presentation “Elizabeth A. Gordon and Buddhist-Christian monogenesis theory” by project member Tomoji Odori. English-born Gordon (1851-1925) arrived in Japan in 1907 and studied comparative religion at the Koyasan monastery as well as Waseda University. Odori analyzed Gordon’s theory — that Christianity and Buddhism originated from a single religion — in the intellectual context of late-Meiji and Taisho Japan, highlighting the contemporary philosophical trends that not only emulated Western civilization but also revaluated oriental or Japanese spirituality. 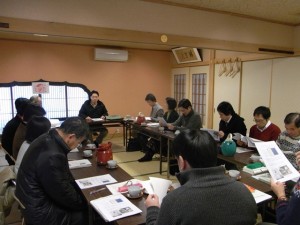 The second presentation was a guest lecture by Professor Masahiro Shiomoda (University of Tokyo), ‘Buddhism: the other and the diverse’. The aim of the talk was to reconsider Buddhism in a new light, emphasizing its ‘otherness’ in various historical settings. Various issues were discussed including the pluralistic characteristics of Indian Buddhism, unification movements in the modern era, and the effect of philological studies of Buddhist texts in the academia. 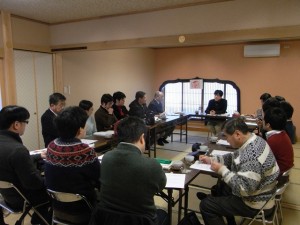 The final session was led by Professor Kokan Fujita, president of Koyasan University, who lectured on the history of Koyasan and Shingon esoteric Buddhism. Taking ‘toleration’ and ‘coexistence’ as keywords, Professor Fujita expounded on the syncretistic fusion of Buddhism, Shinto and folk beliefs, as well as the Mandalic aspects of Shingon esoteric Buddhism. The lecture was followed by a lively discussion by the research group members.

The research group spent the remaining time of the second day and the third day (29 December) inspecting several temples and religious houses in Koyasan. Of special interest were Niumyojin and Koyamyojin in the Kongobuji temple, and the grave of E. A. Gordon, together with a replica of the Nestorian Stele which she placed in the Okunoin area, all of which were reminders to the pluralistic or syncretic nature of the religious culture of Koyasan. 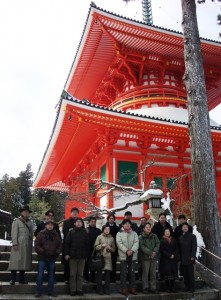 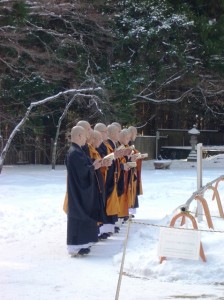 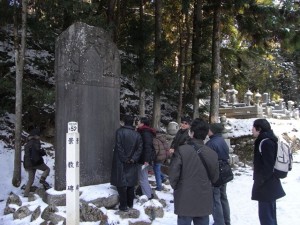 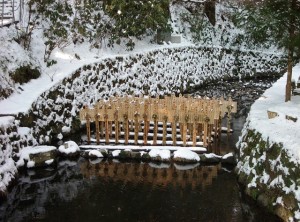