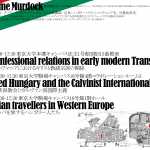 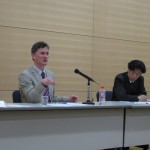 Lectures by Dr Graeme Murdock (9-13 March 2010)
Dr Graeme Murdock, Lecturer at Trinity College Dublin (Republic of Ireland) was invited for our research project to give a series of lectures on Protestantism in early modern Hungary and Transylvania at the University of Tokyo.

The first lecture: “Inter-confessional relations in Transylvania” (Hongo Campus, 9 March) provided an overview of the unique diversity of religions in early modern Transylvania. In this area the coexistence between Roman Catholic, Evangelical (Lutheran), Reformed (Calvinist) and Anti-Trinitarian (Unitarian) religions was recognized in law in the mid-sixteenth century. Dr Murdock argued that religious pluralism in Transylvania was not established on “some elements which may seem in tune with modern notions of religious liberty” but on political necessity forced upon its political rulers under pressure from two great powers, i.e. the Ottoman Empire and Habsburg monarchy. For example, the rights of Orthodox communities, which mainly consisted of Romanian-speaking peasants with no political representative in the Diet, were very limited and restricted. Moreover, as a result of that none of four “received religions” became a state church; rather, they were all fierce rivals in heated controversy to gain people’s souls. In the end the Reformed Church acquired a dominant position during the early seventeenth century. However, religious pluralism was maintained for the sake of political stability and social peace.

The second lecture: “Reformed Hungary and the Calvinist International” (Komaba Campus, 12 March) focused on the Reformed Church in the lands of former Hungarian kingdom and explained its development and its relations with the rest of the Reformed world. The lecture referred especially to the spread of catechism and studying abroad, notably at Heidelberg before the Thirty Years War and at Dutch universities after the war.

The third lecture: “Hungarian travellers in Western Europe” (Komaba Campus, 13 March) reflected on travel literature written by Hungarians traveling in Western Europe, and considered the European imagination during the confessional age. It also considered what the perspectives of Hungarian travellers might tell us about European identity. Dr Murdock was rather critical about putting too much emphasis on a connection between travel and conceptualizations of European space and identity. Moreover he pointed out how important confessional prejudice and preoccupations were to the framing of thought in the early modern period. This lecture was joined by Professor Satoshi Koyama of the University of Kyoto. From the viewpoint of an historian studying early modern Poland, he compared Hungarian sources with Polish ones and commented on the language problems of eastern European travellers and the differences between religious, constitutional and European identities.

Discussions followed each lecture. After the first lecture, Dutch and French cases of religious pluralism in the early modern period were pointed out and examined. Furthermore, as a failed case, attempts at religious concord in Ireland were compared with the Transylvanian case. As to the second lecture, the relationship between the Protestant movement and printing culture was further examined. Dr Murdock added some explanation about the limits of the Protestant reformation in rural areas in Transylvania. Moreover, there were some questions about the influence of the Synod of Dordrecht and millenarianism on the eve of the Thirty Years War. On the final lecture, referring to the “conceptualization” of Eastern Europe, Dr Murdock pointed out that as Reformed Hungary was weakening in the latter part of seventeenth century, some travellers became conscious of Hungarian backwardness, yet they more stressed religiously divided Europe and “strengthened Hungary’s place within the international reformed community”.