The Second Research Meeting (28-29 December 2009)
The second research meeting for the project, Conflict and Reconciliation among Confessions and Religions in Medieval and Modern Europe and Mediterranean World: Study of Comparative History, was held at the Jingu-Kaikan (Ise-shi, Mie, Japan) with 13 members of the project group.

The two-days meeting commenced with a report by group leader Katsumi Fukasawa concerning research budget for 2009, confirmation of group members for 2010, and plans for the international workshop in 2010. Sugiko Nishikawa reported on detailed plans for research seminars by Dr Graeme Murdock, first scholar to invite from overseas for special seminars. 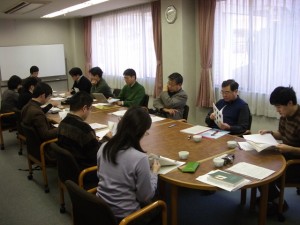 Four members of the research group who were not present at the first research meeting in June 2009 gave brief presentations about their individual research projects. Hidemitsu Kuroki discussed religious and social aspects of Lebanese and Syrian regions, “Uniate” movement and problems surrounding dragomen. Kei Nasu discussed problems of the proposed “uniformity of religion” during the 1640s among the Protestants in England and Scotland. Shiro Miyatake expounded on the history of Jewish religion in the Ottoman Empire and suggested several research possibilities relating Alliance Israelite Universelle, Jewish communities in the late Ottoman period, and Zionist movements. Asuka Tsuji discussed historical places of Dhimmi (Jews and Christians) under Islamic law. Tsuji proposed to work on Coptic saints to investigate inter-religious relations in fourteenth-century Egypt.

Interim reports by other members of the research group about their individual projects followed; Katsumi Fukasawa on eighteenth-century French convulsionnaires, Hiromi Saito on inter-religious relationships in early modern Venice, Sugiko Nishikawa on occasional nonconformity in early modern England, Yutaka Horii on relationship between Ulama, Sufi and Dhimmi, Shunsuke Katsuta on changing religious identities in nineteenth-century United Kingdom, Toshiyuki Chiba on the life and works of Nicolaus Cusanus, Makoto Kato on new findings from the records of the Inquisition in southern France, Yutaka Miyano on religious debates in sixteenth-century Russian Orthodox Christianity, Masanori Sakano on French missionaries outside Europe in seventeenth and eighteenth centuries and their impacts on Catholic Reform movements. Each presentation was followed by questions and discussion. Also reports and suggestions were made by each group member about scholars to be invited from overseas for the proposed international workshop in 2010 and onwards.

The later part of the meeting was led by Professor Mannen Hayakawa (Gifu University) who gave a guest lecture on Ise Shrine and the history of Shinto in Japan. A guided tour of the shrine followed. 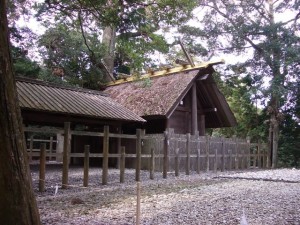